Last week I had a different sort of week. I didn’t do any of my normal duties or routines. I didn’t go into the school where I work supporting readers each week, I didn’t cook everyone’s tea back at home each night, and I didn’t even put out the crazy mess that is the recycling each morning.

What I did was go away and write. I wrote all week. And if I wasn’t writing I was talking about writing, or I was reading and reflecting and sharing work with other writers as part of a week called The Freehouse of the Imagination. It was a week away for those that teach creative writing, and write themselves, at Arvon’s The Hurst in Shropshire.

How lucky was I to be going away for this week? It turned out I was incredibly lucky indeed. But before I went to The Hurst I admit I was pretty terrified.

I guess it was all the unknowns. Who would I meet on this week away? What if I just couldn’t think, and forgot how to write? Would the tutors who were leading it all be kind? And what if I got lost in the woods? As a Londoner I admit I’m not entirely at home in the woods and The Hurst is SLAP BANG in the middle of the woods…

In lots of ways I was right to be nervous.

On arrival it was clear that I was definitely SLAP BANG in the middle of the woods. Here is a photo I took on Day 1 when I braved a walk in the Hurst Rough, alone.

And that evening , I was asked to write something on the spot, after dinner, and share it there and then with everyone.

It was all just as frightening as I’d imagined it would be. When I went to bed that first night I felt that all my worst fears were in fact coming true, and I wondered why I had come.

Except of course by the middle of the following day I took a moment and realised that what I’d anticipated was only the negatives, and that all of those negatives were based on my fears – rational or otherwise. What I hadn’t anticipated were the positives. And I think that’s because every time you write something and share it, you are in essence making yourself vulnerable. You are taking a risk. And with no time for reflection, revision or redraft – writing freely like this, as we were asked to do, amongst virtual strangers at the beginning of the week – was without doubt exposing in all sorts of ways.

But it was, as it turned out, also utterly brilliant. A certain dynamic built quickly between us all, writers and tutors, and across the week some startling and funny and moving pieces of writing were shared. It was like we were all unlocking a very particular part of our creative brains, and it was in no small part because of who we were, and how we’d come together in this way, with no wifi in the wood. It meant we had to trust – both ourselves and one another.

It reminded me of a scene that I’ve always loved from the film Parenthood, where the main character Gil has been complaining about how complicated his life is, and Grandma walks in…

Grandma: You know, when I was nineteen, Grandpa took me on a roller coaster.

Gil: What a great story. (Sarcastic)

Grandma: I always wanted to go again. You know, it was just so interesting to me that a ride could make me so frightened, so scared, so sick, so excited, and so thrilled all together! Some didn’t like it. They went on the merry-go-round. That just goes around. Nothing. I like the roller coaster. You get more out of it.

So I guess this post today is just a little reminder to myself that often it is very scary to do something new, and when you sit down to write, somehow every day can feel like doing something new. But if you can be brave, and just commit to trying, then in all likelihood you will be rewarded. What I didn’t say about the first walk I took in the Hurst Rough was that I saw a deer, and that made my week pretty special too. 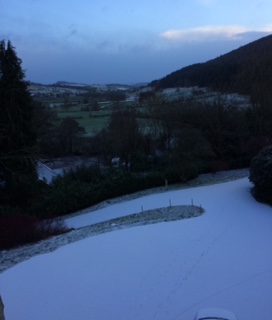 View from my bedroom window at The Hurst

2 thoughts on “Rollercoaster or Merry Go Round? Which would you choose?”