Where do you get your ideas? When asked this question, I often tell kids in schools that I get my ideas from other books. Not in a direct copycat way. Often in a fairly indirect and circuitous root. Witness the fact that one of the inspirations for Chloe’s Secret Princess Club is…Jennings 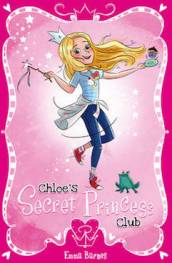 I’ve always loved Jennings. If I’m poorly, and in need of uplifting, laugh-out-loud entertainment, then Jennings is the series of books I’ll reach for. It’s a comfort read. And if you’re feeling down and depressed, whatever your age, I can do no better than recommend you curl up with Jennings and Darbishire, Jenning’s Follows the Clue or perhaps my absolute favourite – Jenning’s Little Hut.

Jennings and his best pal, Darbishire, were invented by a school teacher called Anthony Buckeridge (apparently the clam, unflappable Mr Carter of the books is modelled on him) and he obviously understood ten year old boys really well. They have a whole invented language (“fossilized fish hoods”) a dodgy grasp on reality, a logic all of their own and a tendency to muddle reality and fantasy. When they hear about Sherlock Holmes, they immediately set out to catch criminals (not thick on the ground at their boarding school) and when they are receive a toy printing press as a birthday present, they embark on journalistic careers (how this decision leads to them fishing down chimneys on the school roof, trying to extract a parcel of fish lodged in a teacher’s chimney, I will leave you to discover).

Antony Buckeridge, asked about his approach to writing Jennings, commented that he imagined some small thing going wrong, and then went on from there – and this is how the books work, with hilarious effect.

All the same, there’s a big leap from funny stories of boarding school life, set in an all-boys private prep school in the 1950s, to a book about three girls having a princess club in an ordinary primary school in 2015.

I’d thought for a while I wnted to write something a bit like Jennings in a few respects. For one thing, I wanted the school setting to be important (a lot of my previous books have been family-based). I also really liked the idea of a child that can’t differentiate very well between reality and fantasy – who gets a bit carried away by their own imagination. It’s a fairly common trait in children, and in some classic children’s books (Anne of Green Gables pretending she’s being the Lady of Shallott and almost drowning, for example).  And I loved the idea of everything starting with a tiny thing that goes wrong.

Jennings imagines he’s a detective, and gets locked in the school laundry van.  Chloe imagines she’s entering another world (like Lucy from Narnia) and gets locked in the classroom cupboard.  Jennings reckons he’s a news reporter.  Chloe reckons she can be a princess…and (as with Jennings) one thing leads to another, and Chloe imagines that she’s Cleopatra bathing in asses’ milk and …well, you’d better read on to find out!

I’m not sure that anyone reading the books will detect the parallels, but I know that they are there.  And it’s my little tribute to Jennings, that just as his exasperated classroom teacher is called Mr Carter… so is Chloe’s.

For more information about Emma’s books look at her web-site.