It’s here. How to Catch a Witch by Abie Longstaff has finally published. Yay!! To celebrate we’ve managed to catch Abie to tell us all about her latest book. Thanks for swinging by, Abie. Over to you.

No matter what I write, magic seems to creep in. I just can’t help it.

I think I love fairy tales because, at their heart, they are stories of struggle and achievement.

Nowadays, when you think of traditional fairy tales, you think about girls waiting to be rescued; of damsels in distress. But you have to bear in mind that when these tales were written, thousands of years ago, marriage was much more significant for women – it was one of the only routes to escape poverty. Girls couldn’t inherit; they couldn’t really earn a living. In this sense fairy tales were empowering: they featured a female main character; someone brave and clever, competent and resourceful; someone who had the wits to escape her hard life and achieve a remarkable goal – moving up on the social ladder; a commoner marrying a prince.

Although the ‘Disneyfication’ of tales presents a sweet, pretty image; in fact, the original tales were much darker, more grown up, and much, much gorier. Did you know that in Hans Christian Anderson’s version of Little Mermaid she commits suicide? That Cinderella’s stepsisters get their eyes pecked out by birds? That the witch is angry with Rapunzel because she gets pregnant?

Fairy tales girls are tough. They know courage isn’t always about fighting with a sword: it’s about believing in yourself, keeping your head high, and trusting that the nasty bullies won’t win. I love this sort of storyline – you see it again and again in storytelling; from Star Wars to Harry Potter. Fairy tale heroes and heroines are survivors and fighters. They have a problem and they get on and sort it out.

Last year, a book idea came to me about a modern girl; a girl who has a problem.

Charlie has just started Year 7 in a new school and nothing is going right. She’s desperate to fit in, desperate to feel normal – but she’s not. She’s weird and strange and different. Being a serious, modern sort of girl, Charlie doesn’t just hang around to be rescued. Nope. She sets out to catch a witch – a witch who will solve all her problems. Like the fairy tale heroines, she’s clever and resourceful and brave. She starts by researching what the witch will look like: 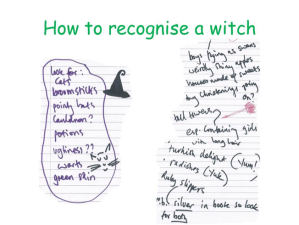 And where to find her:

But Charlie is looking for a fairy-tale witch, one with a wand and a broomstick and a pointy hat. She doesn’t realise that, in a modern world, magic might just be a bit closer to home. And you know that weirdness she feels? Well:

Weird is just another word for special.

Thanks Abie.  We can’t wait to read about Charlie and her magical adventure.

One thought on “A Guest Blog from Abie Longstaff”