I hope you’re all enjoying the autumn! I am, well, apart from the fact that this week I had an actual NEAR DEATH EXPERIENCE!!!! Well, OK, maybe it wasn’t that near to death, but it was pretty blimmin’ scary. My friend and I were walking our dogs on the lovely common up the road, as we quite often do. Just so you can imagine the scene, it looks like this:

I.e. v naturey and not at all scary. It even has lovely ponies, which are also nice and look like this:

So, imagine my dismay et al, when we came round a corner and found ourselves face to face with one of these:

EEEEEEEEEEEEKKKKKKKKKKKK! Especially for my friend, who didn’t even know they grazed cows up there! Well, I knew they grazed cows, but I wasn’t expecting to find a massive great black horned BULL!!! I stared at it in shock but it carried on walking towards us. If you stick your arms out to the sides, that’s about how far away it was.

And it did staring. In fact it was really good at scary, intense staring.

Then I realised it had a pal with it too, which looked like this: 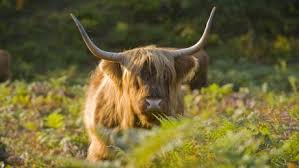 And the pair of them had another big black bull in tow!

So I turned round and told my friend who was right behind me to walk the other way and we stumbled off through the undergrowth, thinking that 1. it might not follow us through the bushes and 2. we could always chuck the dogs over the barbed wire fence at the bottom of the hill and scramble over ourselves if it came charging at us.

My heart was pounding, I didn’t think my legs would hold up, I felt sick and shaky and utterly terrified. We managed to slip through a gateway and watched them pass, right up close. They were amazing, enormous beasts and their horns were pretty impressive, when we weren’t in danger of being gored by them.

Later on, another friend of mine who used to be a country ranger had a good laugh about our ‘terrifying ordeal’ and told me that beef bulls are pretty placid and were unlikely to take a run at us. The dairy dudes are the ones to watch out for, apparently!

The whole thing made me think, though – as a writer I have to create characters who are in the midst of powerful emotions – joy, hatred, fury, love, nervous anxiety, hope, to name but a few (as well as eyeball-quaking TERROR, of course!). In a way I get to stand ‘behind the gate’ because it’s not happening to me, but in another way I have to evoke those feelings and emotions in myself and remember them strongly to make them really real in my characters. So I tend to draw on everything in real life that happens to me for use in my writing. And that’s why, after a cup of tea and many biscuits and loads of my friend and I going, ‘OMG, I can’t believe that!’ I was grateful to the suddenly-looming bulls – next time I need to conjure up heart-pounding, gut-wretching, leg-powdering terror, I’ll know where to start!